Among the paths of Erice: Trekking for everyone

Strada Del Vino Erice DOC / Flavor / Among the paths of Erice: Trekking for everyone 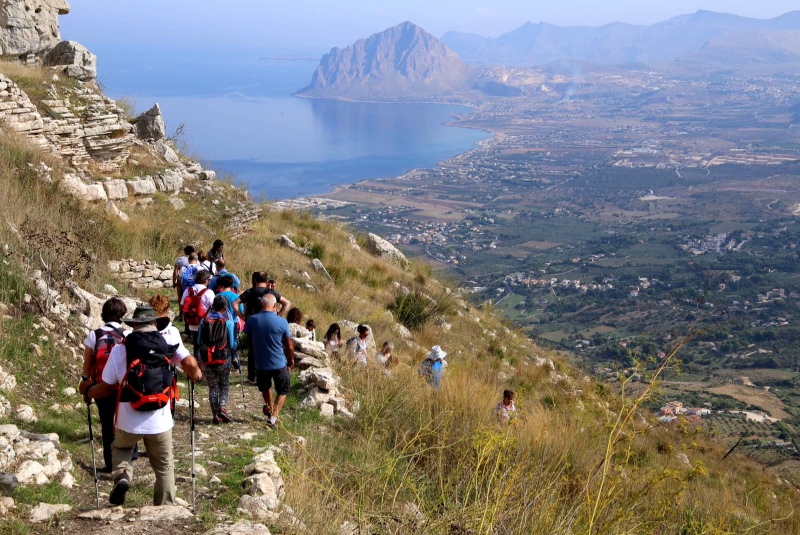 A stone's throw from the town of Erice, among the paths that surround the millenary walls of the town that once belonged to the goddess Venus, it is possible to enjoy an unforgettable walk in the mountains characterized by nature, history and breathtaking views of the sea.

A paradise for trekking lovers where every corner pulsates with myths and legends and shines with that aura that makes the medieval village of Erice one of the most fascinating places in Sicily, an oasis made of colors, shadows, reflections, and glimpses of light on the Gulf of Bonagia and Monte Cofano.

The route starts in the village centre, near the cathedral, and winds along its external perimeter. From here, it is possible to take the path that leads to a beautiful wooden bridge, subsequently continuing  through Porta Carmine and Porta Spada.

While exploring, visitors will encounter numerous spots that are the setting of Erice’s myths and legends, such as “the devil’s foot”, a peculiar footprint which is imprinted on the Elymian Punic Walls. Legend has it that this sign was left by  Satan as he ran away from Erice following his defeat at the hands of Saint Christopher after he had stolen the velvet mantle of the Madonna from the nearby church of Sant’Orsola.

Going down the path, the next top is the Spanish Quarter, a  place full of history and mystery.
When the fog descends, it really seems to be in another era. Here stand the ancient medieval churches of Sant’Antonio and Sant’Orsola. Going up, it is possible to go back to the start of the path by taking via Apollonis or continue the excursion passing through Porta Castellammare and going to visit the church of Saint Hippolytus, from which it is possible to admire the sea and the Gulf of Bonagia.

From this point it is possible to undertake various itineraries: going south to Valderice; going north towards the church of Santa Maria Maggiore and then either returning to Porta Spada, or continuing towards the sea of ​​Bonagia; passing under the rocky ridge of the Castle of Venus.

In short, the choice is very varied and anyone, even the less experienced, can enjoy  a unique excursion through nature, history and legend.